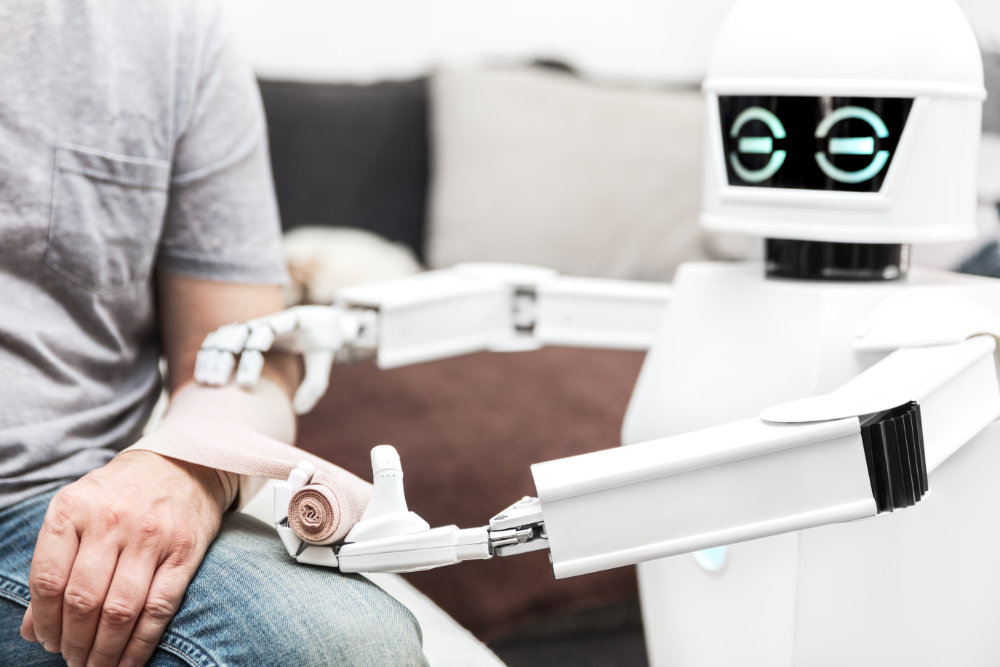 7 Medical Robots That Will Change the World

Robots are being implemented in every single industry of the world and it would be nothing short of foolishness to expect that they wouldn’t be used in the medical field. Basically, the way robots work is that they make our lives easier – Right? That is like the basic purpose of robotics. They’re meant to serve human being and what better way to serve humans than to care after sick patients and then assist the doctors trying to make their lives better? It all sounds pretty witty when you think about it this way, but the truth is that if there is one industry that requires automated assistance, it’s healthcare. And, fortunately for millions around the world, medical robots are now an entire category of robotics. But, what exactly are they? Let’s get into that.

What are Healthcare Robots?

Healthcare robots, or more commonly called medical robots, are automated machines that are aimed to improve the whole process of human treatment. The first thing that may come to mind is robots performing biopsies, but the thing is that this is just one of the application of robotics in the medical industry. They’re such a revolution that it won’t be an over-exaggeration to say that they’re saving millions of lives around the world. Think that we’re just being melodramatic to add an element of wonder to the article? Keep on reading and you’ll think differently.

How Are Robots Being Used?

While we’re on the topic of applications of robotics in medicine, let’s elaborate it a little bit. What exactly do robots do in a hospital? Well, the answer to that question is pretty much anything. They can be involved thoroughly in between all aspects of medicine, pre-surgery prep, surgical procedure and post-surgery recovery. Robots can do everything from moving medicine to another floor in the hospital to helping nerve-damaged patient regain feeling in their leg. Their applications are truly endless, and one can only wonder if one day, the doctor-robot ratio in a hospital will tilt to the other side.

So, now moving on to the title of this article, medical robots that are a revolution in robotics. There are quite a few of them, we could name about a lot of them, but in order to keep things precise and to the point, here are 7 of the top robots being used in medicine today.

Let’s start off by one of the oldest, yet still the most popular surgical robots out there, the da Vinci. The da Vinci is a surgical system that was developed by Intuitive Surgical and was approved by the FDA in 2000. The whole purpose behind da Vinci is to complete surgical procedures with the least amount of incisions. Meaning that the patients will bleed a lot less, require lesser blood donations and recover a lot faster. The da Vinci is a life-saver in the true sense of the world, and it’s such a huge part of medicine, that it’s not even considered an ‘outsider’ per se. The numbers are there, in 2012, 200,000 surgeries were performed that involved help from the da Vinci.

Yes, there is some conflict on whether or not da Vinci can be called a robot. The machine does not have the capability, and nor will it in the near future, to operate on its own. da Vinci requires a trained surgeon on the side with his hands on a console. The benefit of the ‘robot’ is that it doesn’t have trembling hands, it doesn’t sweat, and it definitely won’t tire out after an extensive surgery.

Let’s talk about something that’s not directly linked to the treatment of a patient, but instead, somewhat relevant to making the recovery process easier. But, first, let’s discuss what telepresence robots are. To really simplify things, a VGo is a nothing but a screen linked to a computer that transmits data through Wi-Fi to an offsite device. However, the things a VGo can do are a lot more important than you might think. First, a VGo can act as a bedside partner to a person who’s away from his family. VGo will allow the person to stand by the patient’s side, talk to them, discuss things with the doctors and most importantly, comfort their loved one during a hard time. Secondly, what if you have a family doctor that’s halfway across the world and you need him, but he can’t get to you in time. A VGo would allow him to communicate with you as well as the attending doctor as if he was right there.

ROSA® or Robotic Surgical Assistant, is a robot that has been assisting the University of Minnesota’s neurosurgeons in a variety of different cases. Some of these include performing biopsies, electrode implanation, cerebral cortex stimulation, deep brain stimulation and open skull procedures. ROSA® offers the highest amount of precision possible to provide surgeons and just like da Vinci, it specializes in making surgeries less-invasive, thus drastically decreasing the recovery time the patient will have to go through. ROSA® isn’t being as widely implemented as some of the other robots on this list, but it’s certainly on it’s way to being one of the best piece of machinery the world of medicine has seen in a long time.

The HOH, or more commonly called, the Hand of Hope is a robotics hand meant for rehabilitation of patients suffering from nerve damage. The HOH is recommended to patients that have partly or completely lost feeling in their hands. The HOH consists of a skeletal robotic hand that has room for your hand to fit in snugly. The HOH acts as a biofeedback device where sEMG sensors detect a person’s muscle signals and strengthen their will to move their hand. Along with HOH, the patient is required to look at a screen displaying EMG signals which further acts as an initiative for the patient to move their hand.

The reason we’re not specifying a certain name is because is category is way too diverse to name the best robot amongst them. Basically, there will be times when a flatlining patient requires a shot that’s stored two floors down. Let’s be absolutely blunt for a second, a patient is not going to wait for a nurse to run up the stairs or some random person to angrily press on an elevator button. In such cases, you need a transportation medium that’s a lot faster and will deliver the meds in seconds. That’s where medical transportation robots come in. They’re not just saving lives by rapidly delivery packages, but they’re also taking a huge load off of the nurses and allowing them to focus on the more important aspect of their jobs, focusing and looking after patients.

iPT 3200 is the brainchild of iPT, Infection Prevention Technologies. The main purpose of this robot is to clean out rooms and get rid of bacteria. You may be wondering, why exactly do we even need sanitation robots? Why move away from the classic janitor with a mop? Well, the truth is that even with all the modern cleaning supplies, CDC has reported that one in every 25 patients pick up a disease at the hospital. So, outsourcing this job to the 3200 is a much better option. The bot uses UV-light to double check and double-wipe all the infected areas of some of the dirtiest rooms in a hospital. It’s rapidly becoming a trend to buy robots for sanitation purposes and soon enough in the future, robots like the iPT 3200 will be the only available cleaners in a hospital.

CRS 225, from ScriptPro, is a prescription-dispenser. You may wonder how a prescription-dispenser is changing medicine, but allow us to explain. Prescription dispenser isn’t an easy job, it requires the utmost level of precision. Over 250,000 people in the U.S. are dying every year because of incorrect medicine and doses. With the help of CRS, you’re dropping that number to zero. Apart from that, it only takes up 12 square feet of space and contains 225 universal dispensing cells. Each drug is kept separately, ensuring that there is no cross-drug contamination.

This was all probably pretty fascinating to read and you probably let out a light “Go Science!” cheer somewhere in the middle as well. But, we know that you’re wondering if one day, it will be robots breaking the news of illnesses to patients in the hospital. As the situation currently stands, we don’t think such a day will ever come. While robots in medicine are a revolution – Yes, we’re over-using that word – but, you can’t argue that they’ll wipe out doctors entirely. Medicine is so much more than just performing surgeries. It’s about consoling a child after a shot, it’s about calming down a single-mother with breast cancer, its about telling kids that their father is never going to wake up from a coma. Do you really think that a robot will be able to do all of this?