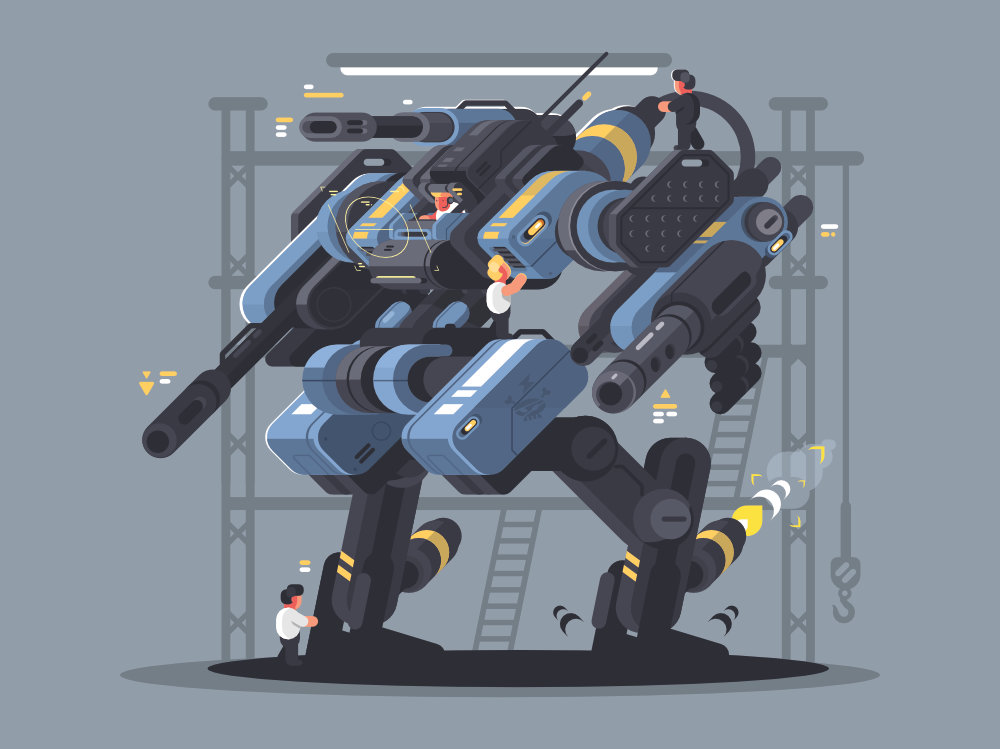 Battle robots are some things the mainstream media is fond of showing and often exaggerating; be it in the form of monstrous alien giants like the Transformers or more child-friendly and huggable Baymax in Big Hero 6. But what exactly are these battle robots? Are they really gigantic living, oil breathing pieces of metal? Have they been sent from the future to exterminate the human race? Or are they simply the result of the overactive human imagination? If you have been riddled quizzical by thoughts about battles robots and maybe want one of your own then you have come to the right place.

We will be talking about all things battle robots. What they are, how they’re made and how you can make one of your own.

What are Battle Robots?

Battle robots are used in robot combats, which are typically competitions in which two customized robots compete and use various methods to destroy each other. Battle robots are basically remote-controlled vehicles with armor and some kind of weapon.

While a robot battle lasts anywhere from two to three minutes, these few minutes are filled with harsh conditions and repeated attacks. Robot battles can be pretty brutal; sometimes even ending in the annihilation of the losing party (robot not the owner). So to ensure victory or at least to avoid complete decimation battle robots are often customized with heavy armor and lots of good wishes.

While the kill or be killed rule system might make it seem otherwise but there are certain rules and restrictions governing the chaotic world of combat robotics. Let us first go over the ways to win a competition, these may vary slightly from competition to competition;

As you might have noticed most of these rules are similar to ones that apply to human combat sports, other than the gutting your opponents to death one.

What is The Difference between a Battle Robot and a Normal Robot?

Technically speaking battle robots are not real robots. They lack the level of anatomy most robots have. Battle robots are simply remote-controlled vehicles with armor and some kind of weaponry. The main job of the structure of a battle robot is to cause damage to the opponent and avoid damage in return. Both these things are achieved with some relatively simple components; thus, a battle robot does not require the complex anatomy that most normal programmable robots have.

Like in many human combat sports the participants of robotics battles, in this case, combat robots, are also divided into weight classes. Knowing why such classifications are made will greatly help with your understanding of how these competitions work and will also help with deciding on which kind of robot is best for you.

It must also be kept in mind that exact class definitions might change from competition to competition.

Heavier robots are often more sturdy and can exert more power but they are also a lot more expensive. Lightweight robots, while not as strongly armored, happen to be much cheaper. For a beginner starting out with a lightweight robot is advised, this will provide you with more time to understand the more complicated technicalities involved in making a formidable combat robot without having to lose too much money.

For a beginner, it is important to remember to keep the robot design simple. The weaponry used must also be kept simple, it is suggested that you start out with a wedge or flipper, and slowly move on to more complicated and destructive weapons.

Make sure not to procrastinate. Creating a battle robot from scratch is a long and often arduous task, with many bumps and hiccups along the way. Start early and constantly testing your robot for faults is key, since the creation of the battle robot is pretty technical you never know what can go wrong.

The anatomy of a battle robot might seem relatively simple but a lot of thought has to be put in the making of a battle robot. Even though of these battles last from anywhere between two to three minutes, the battles are anything but easy. The robots have to deal with constant attacks from the opponents while having to try and land some hits themselves. Such demanding conditions mean that the material for the robot much is chosen carefully.

The basic materials required to build a battle robot are:

One look at this list might make building a combat robot seem like an easy task but it is a job that requires a ton of technical knowledge and experience. There are many things that must be kept in mind while designing the robot; most important is the type of material used. You may want the armor to be heavy and sturdy to avoid damage but have to remember that heavy armor might slow down the robot and make it easy kill.

Most importantly make sure not to lose hope and not give up. Creating a combat robot can be an extremely frustrating job especially for a beginner but do not get intimidated by these obstacles.  Keep on moving forward with your project and you shall receive the fruits of your labor and money.